UK’s economic growth decelerates after a slowdown in services

The British service sector slows down its growth in September to value last seen in 2.5 years. 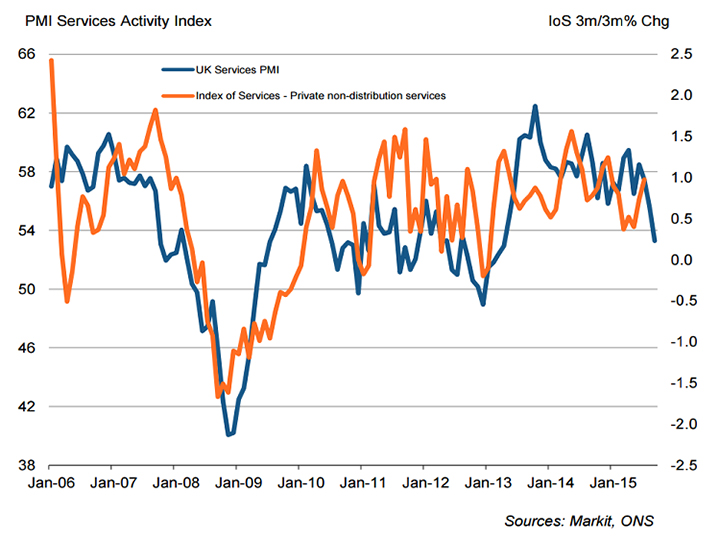 Financial data and survey firm Markit delivers troubling news from the service sector as last month it marked its lowest growth rate since April 2013. The purchasing manager’s index (PMI) for the headline sector fell closer to stagnation (50) from 55.6 in August to 53.3.

In the words of Michael Saunders, economist at Citi, this development means that “growth remains comfortably positive, but is no better than average.”

However, the services sector makes up some three-quarters of the overall UK economy, meaning that any negative change leads to serious consequences for the country.

Chief economist at Markit, Chris Williamson, observed that “the economy sank further into a soft patch at the end of the third quarter” and is now growing at 0.3% compared to 0.7% in the three months to June and weakest overall growth in nearly three years. A surprising turn, given that Britain’s economy was the fastest-growing from the G7 members in 2013 and 2014.

Furthermore Markit’s survey takes into consideration indicators from the smaller manufacturing and construction sector, which performed poorly last week and caused the all-sector PMI to sink to its lowest since April 2013 at 53.9, down from 55.4. The figures showed that gross domestic product (GDP) growth has slowed to 0.5 percent in the third quarter and could be even slower in the last months of the year.

Williamson says:
“Weakness is spreading from the struggling manufacturing sector, hitting transport and other industrial-related services in particular.
There are also signs that consumers have become more cautious and are pulling back on their leisure spending, such as on restaurants and hotels.”

“Some firms reported hesitation among clients in placing new contracts, linked to global economic uncertainty,” is Markit’s reasoning behind the lowest orders volume in over two years.

And with Germany, Ireland and Spain’s service sectors also slowing, signs are building that the European economy may be faltering.

Consultancy firm Deloitte polled chief financial officers (CFOs) of some of the biggest British companies and found out that corporate optimism and risk appetite have dropped sharply, and some 73% stated that the level of financial and economic uncertainty was either above average, high or very high. Furthermore, among the top worries of CFOs are a possible upcoming interest rate rise and the weakness of heavily indebted emerging markets. 60% of the poll takers believe their business will be negatively impacted by the Chinese slowdown.

Could Gaming Be a Good Investment in 2020?

How Much Money Do You Need to Start Trading