The English high-tech company Surrey NanoSystems made the news in 2014 by announcing Vantablack, now recognised by Guinness World Records as the blackest substance ever created by man.

Originally developed in collaboration with the UK National Physical Laboratory, Vantablack absorbs up to 99.965 % of visible spectrum radiation: trace a laser pointer over it, and the light simply disappears, trapped inside the material and never reflected back to your eyes.

While light-absorptive coatings are not a new invention, the extremely high level of absorption achieved by Vantablack opens opportunities for new scientific and industrial applications.

Wondering about the name? VANTA is an acronym for Vertically Aligned Nanotube Arrays. Carbon nanotubes, each only billionths of a metre thick, have a tensile strength approximately 100 times greater than that of steel of the same diameter, as well as a variety of other unusual properties.

Vantablack is created by “growing” nanotubes on a metal surface in a complicated process involving extreme heat and several layers of different substances. 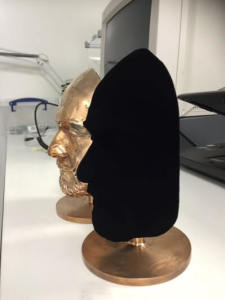 Unsurprisingly, the eerie, perception-defying nature of the material has also captured the attention of artists. At present, though, licence to use Vantablack for artistic purposes has been granted to just one man: the British-Indian sculptor Sir Anish Kapoor, famous for his experiments with colour and “explorations of the void”.

While Kapoor may be a perfect candidate for work with the otherworldly substance, Surrey NanoSystems’ decision to make the licence exclusive has been criticised by fellow artists.

However, as application of Vantablack requires a specialist process and is generally possible only on materials with a melting point of around 550 °C or above, keeping its use in creative arts limited for now is understandable.

This may change in the future, as development of the material is progressing, with a new sprayable form known as Vantablack S-VIS unveiled in early 2016. The application process is much more flexible than that of the original Vantablack, which is applied in a vacuum chamber using chemical vapour deposition. The spray is also suitable for a much wider range of materials.

The price of the advanced material still remains high: ounce for ounce, it is more expensive than both diamond and gold (though with the caveat that carbon nanotubes are almost weightless). But, as production processes are scaled up and improved, we can look forward to some mind-bending uses not only in scientific fields, but also in art, architecture, and consumer products.