Social mobility refers to ensuring that everyone has the opportunity to build up a good life for themselves, irrespective of their family background. In a socially mobile society, every individual has a fair chance of reaching their potential. In today’s Britain, however, the landscape looks entirely different – where you start from has a big impact where you end up. The link between demography and destiny is, unfortunately, becoming stronger.

Britain’s social mobility issue is not merely one of income or class background, but progressively one of geography. A stark social mobility postcode lottery exists today, where the chances of someone from a disadvantaged background getting on in life is closely linked to where they grow up and choose to make a life for themselves.

Sad as it may sound, this is the current reality depicted in the State of the Nation 2017 report.

There’s no simple north/south divide in today’s Britain, but instead there’s a divide between London (and its affluent commuter belt) and the rest of the regions. London accounts for nearly 2/3 of all the social mobility ‘hotspots.’ 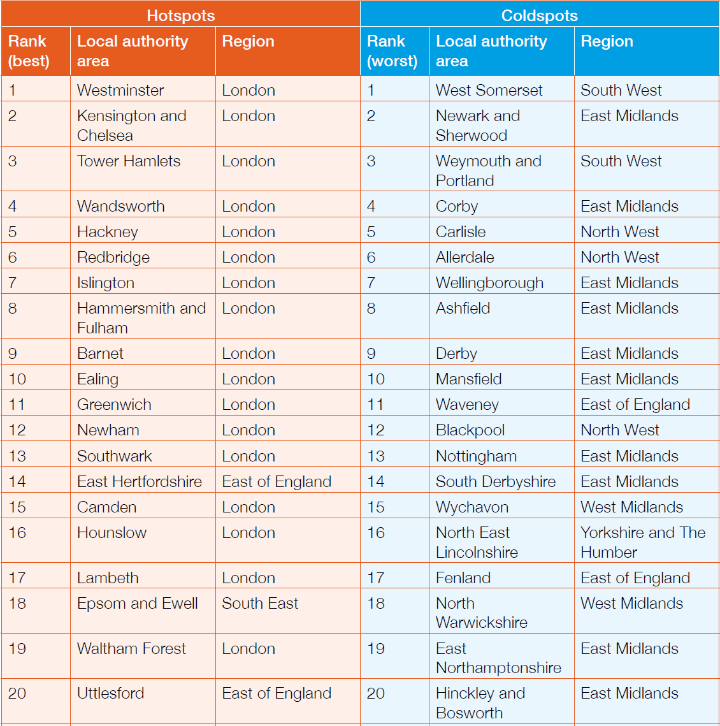 The social mobility gaps open up in the early-years of the disadvantaged children. 14 percent of children are less likely to be school-ready at the age of 5 in the coldspot areas, while in the best areas they are twice as likely to attain a good level of development at the age of 5.

The South East is the top performing region according to the early year indicators, with high development results and good-quality childcare. However, disadvantaged children in London outperform peers who are located in the rest of England.

The attainment gap between disadvantaged and better-off pupils, which started in the early years, continues to widen even more during the schooling years. Urban areas outperform the rest of England in regards to outcomes for disadvantaged young people – London being dramatically in front of each youth social mobility indicator. At both primary and secondary school level, disadvantaged pupils from London do better than in the rest of the country, despite London having the highest levels of childhood deprivation in the country.

Disadvantaged children who attend school in the former industrial urban areas have among the poorest outcomes. Similarly, remote countryside and coastal areas are also performing badly – over 1/5 of the bottom 20 per cent of local authority areas for bad school outcomes are located in those areas.

In any individual’s future success, a smooth transition from school to work is critical, but the chances of disadvantaged children differ widely by region. When it comes to job quality, England is a divided country – London, undoubtedly, being the key actor of the employment landscape , nearly one in three jobs are located here.

Residents from the South East and East of England counties benefit from the concentration of high-skilled, high-paid jobs and levels of fortune that ultimately lead to above-average rates of home ownership.

The high housing costs represent a major drawback to social mobility with a stark North/South divide for housing affordability – roughly 18 per cent of families own their home in parts of London.

Isolated rural and coastal areas, on the other hand, display dire outcomes for youth social mobility. Deprived young people coming from these areas, can find often themselves trapped, considering the limited access to education and employment possibilities. Further, the young people from these areas have poor means of transportation, hence resulting in long commuting hours (nearly 4 times as opposed to urban areas). Despite this sad reality, planned government spending per person on transport projects is £190 in Yorkshire and the Humber, and £212 and £680 in the South West and North West regions respectively.

Careers support varies widely across the regions, and has been particularly limited in the North East and East Midlands regions: two regions with the worst social mobility performance at this particular stage. They also have fewer high-level apprenticeships and a lower number of employers than other regions, which translates to fewer entry-level job opportunities.

Low-pay is prevalent throughout the country – more than 30 per cent of residents in 71 largely rural areas earn below the voluntarily living wage: £312/week – in West Somerset, but £670 in Wandsworth.

Undoubtedly, the labour market in England is highly polarised – people who have higher qualification and a widen set of skills enjoy greater job security, higher levels of development and better prospects of social mobility.

In contrast, those without have a hard time escaping from a world with insecurities continually popping up , endemic low pay, and little prospect of social progress. London and South East regions benefit from a clustering of highly technical and professional jobs, whilst rural, coastal and former industrial areas have a concentration of low-paying jobs.

To address theses issues, the Government has to ultimately be proactive, having its prime focus on rebalancing the economic and work opportunities. Further, a better transport budget relocation needs to be in place to deliver an equal share of investment per person and as a result to contribute towards a more balanced economy throughout the regions. New deals need to be in place as well. Together with employers and educators, the local government need to develop a deal that addresses these social mobility indicators.

Online Betting: A Thriving Industry Despite the Pandemic

A Glimpse at the Housing Market Post-Pandemic

How Much Do People in the UK Spend on iGaming Activities?

How to Stabilise Your Business in a Time of Uncertainty