Have you ever felt unbelievably reluctant to leave the bed on a Monday morning? When your alarm clock rings at 6am and you just feel an overwhelming urge to go back to sleep, then it can be hard to think about the day’s productivity that you must journey through.

One major point in one’s daily routine that helps get into the zone of productivity is coffee. There are a lot of people who gets the same kick from coffee – but how does it work?

Caffeine does a load of things to your body, and it’s no secret that caffeine is used in many different instances.

Caffeine is tasteless, which makes it useful in products such as sports-drinks and protein bars. But caffeine is also used in a long variety of medical instances, to proact drowsiness, headaches and also migraines for example.

In coffee, caffeine is a natural by-product of the coffee beans. The amount in each coffee-origin varies from each origin. For instance, Colombia is known for having the best and the most decaffeinated coffee beans in the world.

What caffeine does to our bodies when consuming it, is a chemical reaction that affects the central nervous system. Caffeine stimulates the central nervous system and will reach the brain. When it does, the most noticeable effect is alertness. You’ll feel less tired and more awake, so you can guess why many sport-athletes use it, and why so many people feel compelled to drink coffee beverages in the morning.

Of course, it’s important to mention that, caffeine is addictive. Too much consumption can make your body less susceptible to caffeine, making your body require more to feel the difference. Keep in mind that these are the more extreme cases.

It is, however, well known, that people who stop drinking coffee for a while, starts to feel withdrawal symptoms such as headaches. When your body becomes accustomed to the caffeine, it will need to get used to not having it in the system.

The taste of coffee is enough to remind many people of the effects that coffee can give you. Many people transfer to decaf coffee, feeling the same kind of rush as they did with regular coffee, though sleeping better. This effect can be argued to be a case of “placebo”, which means that you are drinking something else, but your brain thinks it’s what it’s used to, leading to a faux effect that can make you sleep better at night.

For some people who experience this, the mere taste of coffee, is enough to raise their energy-levels to be more productive.

Espresso and filter coffee are very different, and I’ve known many people who have argued about what holds the highest amounts of caffeine.

You may think that a double espresso will wake you up in the morning, better than a cup of filter coffee would. And it may be true, depending on the amount of filter coffee you would consume.

But a regular cup of filter coffee (350ml) compared to a double espresso (60ml) will actually give you a caffeine kick stronger, than an espresso would. 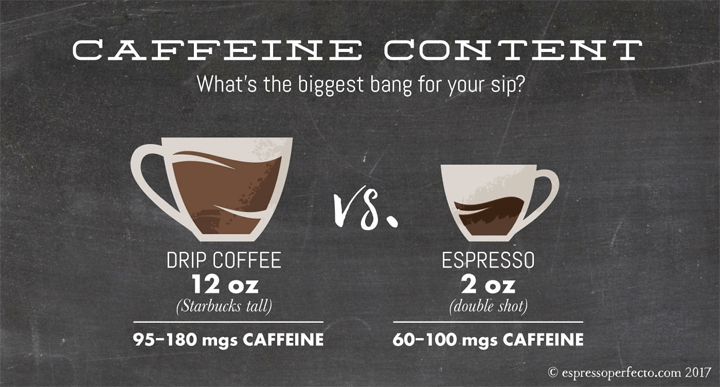 With all this talk about caffeine and the chemical process, it’s not hard to wonder, why coffee has become such a great beverage to improve your productivity.

With the effect of better awareness and energy, plus the taste that so many of us enjoy, this has become a beverage that has revolutionised the world for hundreds of years. But especially today, with the coffee industry growing so rapidly and speciality coffee shops popping up everywhere, it has never been easier to get a cup of coffee to keep you awake on those early mornings.

Coffee definitely improves productivity everywhere. It’s almost standard that every company has installed a coffee machine or more for their staff, knowingly that it will improve the happiness of their employees, as well as help them be more productive throughout the day.

Jonas Hoffmann is a coffee enthusiast who enjoys writing about all things coffee and sharing his knowledge on a variety of coffee courses. Read more of his articles on Coffee You.

11 Ways to Create the Perfect Coffee Space at Home

4 Coffee Industry Trends to Watch out for in 2018

Why the Days of Quality Coffee Might Be Numbered

Coffee is More Than Just a Drink

What About a Coffee-Nap? (Infographic)

What’s so Special About Coffee in the UK?

You Thought Coffee Was Meant For Drinking – Well, Now You Can Also Wear It

What Can We Learn About Coffee from Labels?

What’s Up With Coffee In The UK?